Your location : Home > Location and travel > by air 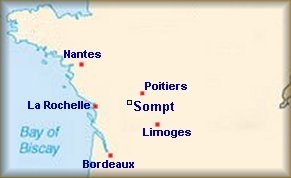 There are a number of airports in the region serviced by the major airports in the UK, by the so called 'cut price' airways such as RyanAir and the better known companies such as British Airways and Air France.

If you happen to live near Stanstead Airport, RyanAir provides a very affordable route in to either Poitier, La Rochelle or Limoges. For example, travelling at the end of May 2003 (Wednesday to Wednesday) we could have picked up two return tickets to Limoges for the great price of £76.80.

British Airways have a scheduled flight from Gatwick to Nantes which can usually be booked for around &pound90 per head, and you get a meal and complimentory drink during the flight.

Update 1 November 2006 - Ryan Air have announced that from Spring 2007 they will be operating a service into Brie-Champniers airport just to the north of Angouleme. It is not known at this time which UK airport will be used for this service but it is yet another good way of travelling to the region.

Use the following links to check out the latest schedules and prices :

* These times are calculated using mappy.fr

The location of each of these airports is shown on the map above.